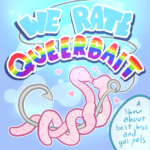 We Rate Queerbait
WRQ 04 - The Prestige

We watched The Prestige, and explored some very interesting and creative ways for two guys to make each other mad. Hating someone is kind of like being in love, right? Close enough???

We learn what would happen if a guy were two guys, and just how far some people will go to avoid living with themselves.