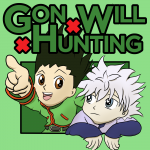 Haha what a loser having a mental breakdown while hiding in a bush. Meanwhile, Morel literally killed a man by breathing, so at least someone on this team is winning.